When To Use A Cast Iron Skillet 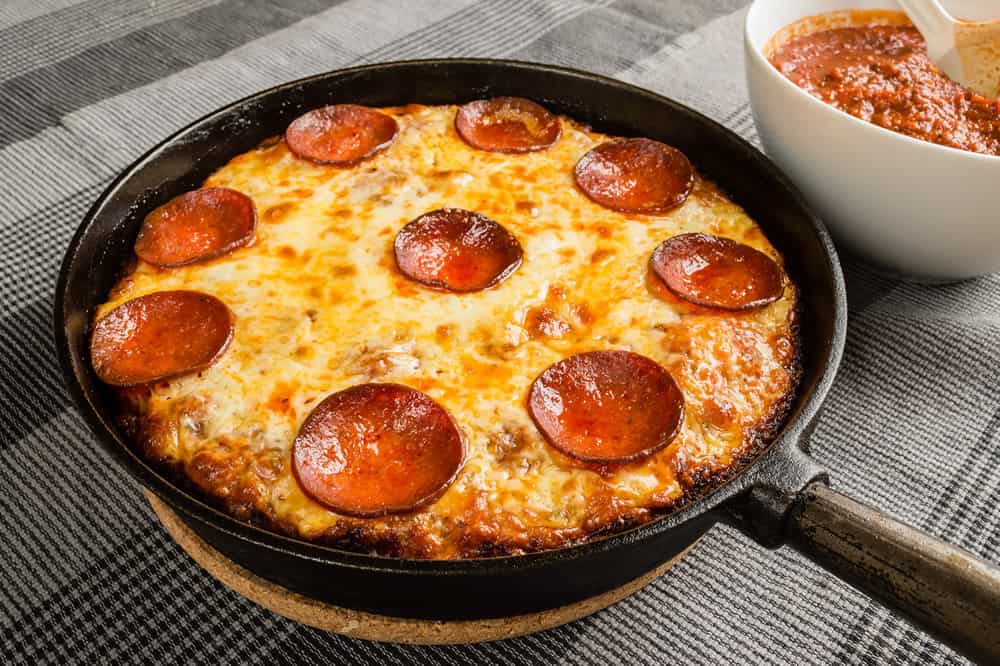 Since everyone learned that Teflon was maybe not the best surface to cook their food on, many health-conscious cooks  switched to using cast iron skillets and griddles when cooking in their homes.

While this may sound intriguing, many people did not grow up with a house that used this type of cookware and might be lost on when to use a cast iron skillet. This article will discuss some of the various uses, as well as what people argue about concerning what should not be cooked in cast iron, and how to care for cast iron cookware.

Many amateur chefs prefer to use their cast iron skillets for dishes that they would traditionally cook in any other skillet. The No. 1 most popular option seems to be eggs. Cast iron skillet lovers rave about being able to cook eggs in a properly seasoned skillet with little to no stick, which can be a huge problem for cooks who have old and scratched-up Teflon pans. One popular dish made in a cast iron skillet is a Dutch baby. While the name sounds vaguely cannibalistic, the dish is anything but, and involves cooking a dough crust that rises and curls over on the edges and filling the dough with toppings of the chef’s choice. These doughy bowls of goodness can be served sweet or savory. Honestly, you could just eat these for the rest of time and probably satisfy any craving.

Because of their weight, cast iron skillets are also excellent for making flatbreads like tortillas. Simply combine the ingredients, knead, let sit for 15 minutes and roll out into tortilla shapes before cooking on a medium-hot skillet for one minute on each side. Homemade tortillas impress even the most high-maintenance significant others, so if you whip out this special recipe on date night, make sure you are ready for your partner to swoon.

What Not to Cook

People love to argue about what should or should not be cooked in a cast iron skillet. In fact, it seems like every cook who prides themselves in their rustic cast iron cooking has a different opinion on how to care for, what goes best in, and what the limits of a cast iron skillet are. Some say that you should not cook highly acidic foods in a cast iron skillet, like tomatoes or lemon juice. Others say that if the skillet is seasoned properly, cooking acidic foods is not an issue. A third party might say that it does not matter what you cook in your skillet, because it is your skillet and you can do what you choose to with it. Who’s to say?

Another non-recommended use of a cast iron skillet is using it to boil water. This makes sense, considering skillets are not designed for water-boiling, so this issue is quieter in the forums of cast iron skillet cookers. However, it has been tested and proven by hungry college students that ramen noodles can be made in any type of pot if the cook is desperate enough. This recipe requires boiling water, so if you’re temporarily financially poor, try using your cast iron skillet for this purpose.

Caring for Your Skillet

No matter what you cook in your skillet, the most important part of increasing the longevity of your skillet is proper aftercare. Again, the discussions of cast iron skillet chefs are divided on this issue, but there are two most prominent camps of thought on this issue. One group says to wash the pan with a little bit of Castile soap, water and steel wool. After washing, rub some grease or oil into the pan and place in the oven to bake for a few minutes, to make sure the moisture has been completely removed. The other group says that cast iron skillets never need to be washed, just baked to burn the remaining food, scraped, wiped off and re-seasoned if necessary. Whichever way you decide to go, the important part is to make sure the pan is completely dry at the end of cooking. Cast iron and rust have been mortal enemies since the dawn of time, and they will take out your cooking utensils in their endless battle if you do not stop the moisture from stirring up trouble.