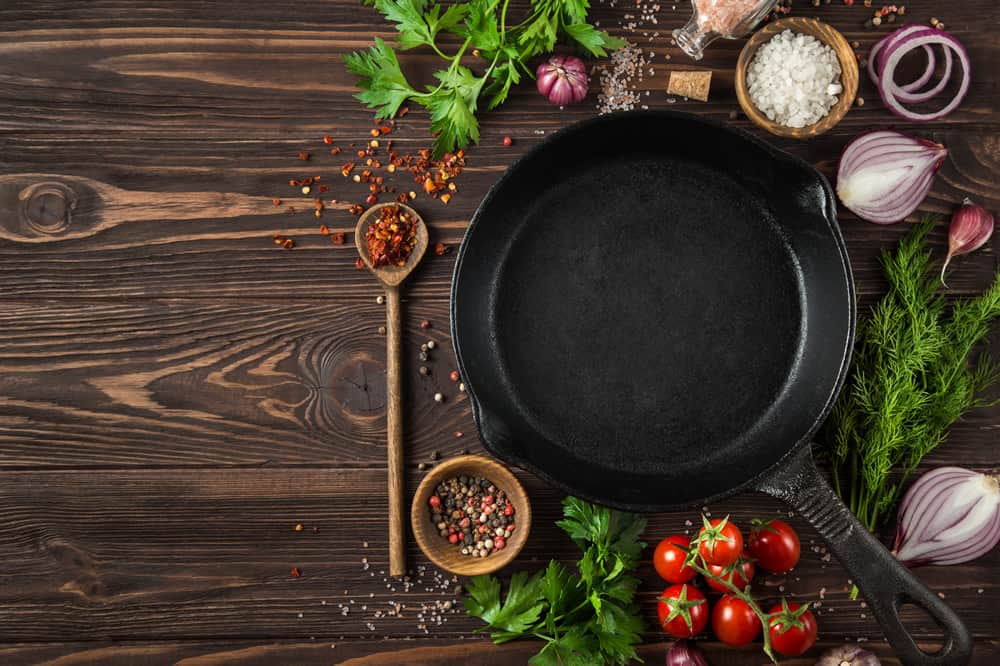 Established nearly a quarter of a century after Griswold in the 19th century, Wagner is the other highly regarded cast iron cookware manufacturer of the time. Both Wagner and Griswold operated at a time where quality was always more important than quantity, which is why many of their products are still in use and in demand all over the US. Ironically, they both became defunct at around the same time in the 1950s.

Fast forward to today, Wagner cast iron skillets are still the go-to cast iron cookware for many fans of traditional recipes and cooking, notwithstanding their age. Here are some of the most popular surviving Wagner skillets available on the market.

The Wagner No. 8 was manufactured somewhere between 1922 and 1935. One of the most produced and widely used skillets, it’s known for its impressive heat distribution and durability.

If you’re new to antique cast iron cookware, you will run into Wagner Ware quite a bit. The company was a giant back in the day for putting quality in front of quantity. The No. 8 double skillet is one of the best Wagner products because it’s very durable and deep enough for cooking all kinds of different recipes.

The skillet is in good overall shape, but it does have visible signs of wear and tear. The bottom is a little burned, and it’s got a seductive patina that’s so popular among traditional cookware enthusiasts. The base sits flat without any wobbling, and the skillet works well on gas and electric stovetops. You could try using it in an open fire, but that could damage the nickel-plated finish.

The inside of this skillet tells a story of thousands of cooked meals. It has seen its share of cookouts, and that’s obvious right away. However, that doesn’t affect the taste or cooking in a bad way. If anything, it adds a unique taste and flavor to your favorite recipes. This particular skillet has been cleaned and re-seasoned, so it’s ready to be used right away. The handle is in pristine condition and provides an excellent grip.

If you are new to the world of vintage cast iron cookware, this Wagner cast iron skillet is an affordable piece and a good starting point for your antique cookware collection. It’s clean and without any rust or pitting.

You can search the internet for months, and you will rarely run into an 8D cast iron skillet by Wagner. When you finally find one of the few remaining pieces, most of them won’t be as clean and well-preserved as this one. Take one look at the photos, and you’re not going to think that this skillet is well over 80 years old. The seller did a great job of restoring it to its formal glory.

The skillet has almost no signs of wear and tear, apart from a few scratches on the bottom. It’s as flat as it was on the day it left the foundry. The cooking surface measures 11 inches in diameter, making this skillet suitable for cooking food for multiple people at once. It measures 15-inches from the top to the end of the handle. All of Wagner’s products came pre-seasoned, but the seasoning disappeared with decades of use.

The seller didn’t want to re-season the skillet for a more accurate presentation of its current condition, so you’ll have to do it yourself. It’s very affordable, so you won’t have to spend a fortune to be able to enjoy traditional recipes. You can always resell it if it didn’t perform to your expectations.

When Griswold went out of business, they sold their molds to the new Wagner (after it was sold to the Randall Company). For a time, Wagner continued to make a number of Griswold cast iron products, and this skillet is one of them. It’s in excellent condition, and it will serve you for decades to come.

You don’t come across Wagner-made Griswold skillets that often, especially in this condition. The skillet has been hanging in a shop, and it hasn’t been used for a long time. It still has the original seasoning and is in impressive condition overall. It has no cracks or visible repairs, only some minor signs of use. You can use it right away, but some cleaning and re-seasoning would not be a bad idea. Even though it says Griswold, this is a Wagner-made cast iron skillet.

The skillet is 7 inches in diameter, so it’s one of the smaller vintage cast iron models. It has a long handle that allows easy maneuvering over the stove. One notable feature is the flat bottom. The skillet sits dead flat on any stovetop and works well with all heat sources including gas and electric stoves and open fires. It’s a collector’s item in excellent condition, but it can also cook meals for many more years. It’s a great pickup at an affordable price, ideal for all traditional cookware enthusiasts.

Griswold and Wagner dominated the cast iron cookware market in the early 20th century, and sometimes they worked together to come up with the best products on the market. This skillet was designed by Griswold and made by Wagner.

It’s not often that you run into usable Wagner or Griswold skillets in cast iron cookware, but finding a Wagner-made Griswold skillet is even rarer. Apparently, Griswold sold its molds to Wagner, then newly under a new owner, after the company closed its doors, and Wagner used the molds to continue making cookware for a few more years. That means that the skillet was made after 1957 and before 1963.

This is one of the last series of Wagner cookware production, and as such it’s as new as you’re going to get. There are no visible cracks, repairs, or chips, and the skillet looks like it’s no more than 10 years old. It’s a bit lighter than the norm, so it works well on glass cooktops, as well as gas and electric stovetops. You can use it over an open fire too, but remember to wear mitts.

The original foundry ground cooking surface is still there, but some minor bumps won’t cause any issues. Someone did a great job at restoring this skillet in an electrolysis tank and has even added a coat of Pam to prevent future rusting. You can use it without extra seasoning, but adding your own layer of butter or vegetable oil isn’t a bad idea. This is a rare skillet ideal for collectors and chefs alike.

Now and then you may run into vintage Wagner cast iron cookware that looks barely used, and that’s what you’ll get with this skillet. It is decades old in fact but years old in appearance. It’s the perfect item for any collector.

There are many different Wagner cast iron skillets you can buy these days, but they are rarely in pristine condition. However, this 6 1/2″ skillet looks almost brand new. It’s a Z-series product dating back to 1920 and up to the 1950s. It’s rare enough as is, but finding one in near-mint condition is a real treat for all Wagner collectors.

The skillet is 6.5 inches in diameter, so it’s one of the smaller models you can buy. The cooking surface looks almost like it did when it was first sold in stores all over the US. We can’t say for sure, but it looks like it still has the original pre-seasoning. You should definitely consider getting this skillet if you want to enjoy traditional cooking techniques and recipes because it doesn’t get any better than this.

The handle is in great condition, and there are no visible cracks or chips. The bottom is 100% flat, so it sits well on all stovetops, including ceramic and glass induction cooktops. This Wagner cast iron skillet also works over an open fire on camping and fishing trips. It may be 80 years old, but it will outperform any modern cast iron skillet without a problem.

There are a lot of reasons why you should get a vintage Wagner Ware skillet for your kitchen. This company was a cast iron cookware giant, and its products are known as highly durable and well-made. Many of these skillets are well over 70 years old, but they are still straight and in great shape. You can use them as decoration for your kitchen or restaurant, but you can also re-season and use them to prepare your favorite recipes the same way they were cooked half a century ago.