How to Store a Cast Iron Skillet 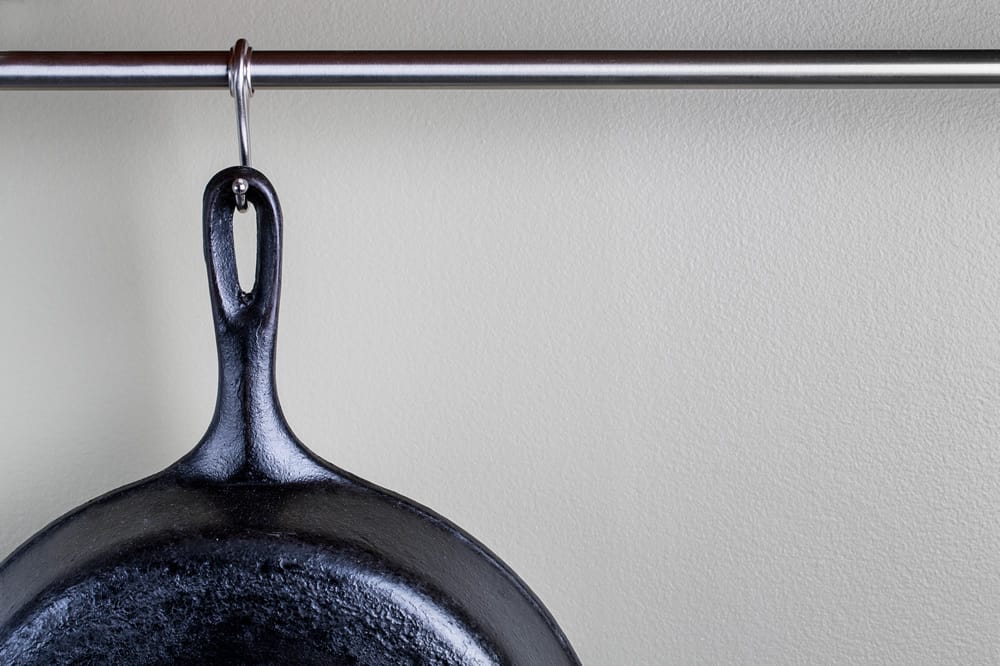 With proper care, infrequent seasoning, and adequate storage, a cast iron skillet can last you a lifetime. Seasoning and storage are equally important to preserving cast iron. You need a protective patina and the right environment to prevent rust.

We’ll be taking you through a look at how to store a cast iron skillet and any other cast iron cookware. Follow our advice, and you’ll be rewarded with a nonstick high-heat cooking surface that’ll give you years of good use.

Look for a Warm, Dry Area

Store your cast iron skillet in a dry area. Cast iron is susceptible to rust, so you want to keep your cookware away from any moisture or dampness. Avoid high-risk areas like underneath your sink or near a stove where condensation could create moisture. If your cast iron skillet doesn’t have any wooden parts or handles, then feel free to store it in an unused oven. Here are a few other ideas for where to store your skillet:

If you’re going to be storing more than one skillet, pot or pan on top of each other, then stack your cast iron with a paper towel between them to prevent any scratches or damage to the protective seasoning. It is actually far safer to store cast iron individually instead of stacking cookware.

Regardless of whether you choose to stack your skillet and other cast iron cookware, always place a paper towel or inexpensive dishtowel inside the pan to absorb any slight moisture that may accumulate.

If you live in an area that has constant high humidity, or very wet weather in general, then you may want to store your cast iron cookware in a large container or zipper-lock bag (make sure that you leave each open a little bit to allow for ventilation).

You’re going to need a pretty big container, but the protection will make all the difference in preventing rust. Another way to beat the humidity in difficult areas is to store your cast iron skillet with a little dry rice inside to absorb moisture.

Use a sponge or a rigid brush (non-metal) to clean out your cast iron skillet after use. Wash your cast iron with hot water but never use any soap or will cause the seasoning to come loose. You also want to avoid soaking cast iron cookware as this can promote rust. Add a cup of kosher/coarse salt into the pan and scrub your skillet until any stuck food comes undone and then follow with a good rinse.

Make Sure That Your Skillet is Dry

Cast iron cookware must never be stored when it is damp. This is the fastest way to end up with rust. Dry your cast iron skillet with a towel and then let it dry in the oven at a low heat. Once your skillet it totally dry, rub a coating of oil everywhere using a paper towel to work the oil in and then return to the oven for another 10 minutes.

Once your cast iron skillet has cooled down totally, wipe away any excess oil. If there is any stickiness at all, then you’ll need to work in the excess oil before baking it again.  Give your skillet a wipe with a paper towel, and if any stickiness prevails then, you may need to give it a quick wipe down with a little soap water to degrade some of the excess oil. Once there is no oil, but instead a glossy, dark veneer, your pan is ready for storage after its cooled down completely.

Store Your Skillet and Its Lid Separately

Never pack your cast iron skillet away with its lid on. Instead, store each item separately. Moisture becomes trapped between the lid and pan which will eventually lead to rust thanks to the condensation. Separate storage solves this problem as long as the area is dry, and there is adequate ventilation.

You can store your cast iron skillet in any area that is free from moisture; just make sure that you don’t sacrifice ventilation or the seasoning could turn rancid. This is particularly true for those who season using animal fats instead of vegetable oil. If you know that you’re going to be storing your cast iron skillet frequently, rather opt for a non-volatile oil like refined coconut oil or perhaps even extra virgin olive oil. Flaxseed is another highly popular option.

Always check the smoking temperature of the type of oil that you decide to use and adjust the temperature of your oven accordingly. Too high a heat will impair the process, but it can’t spoil it. You’ll just end up with clouds of smoke as you season your cast iron, but if you regulate the temperature correctly, you can avoid this problem altogether. All cast iron pans can generally be stored for extended periods if packed away correctly.