Is Cooking With Cast Iron Healthy? 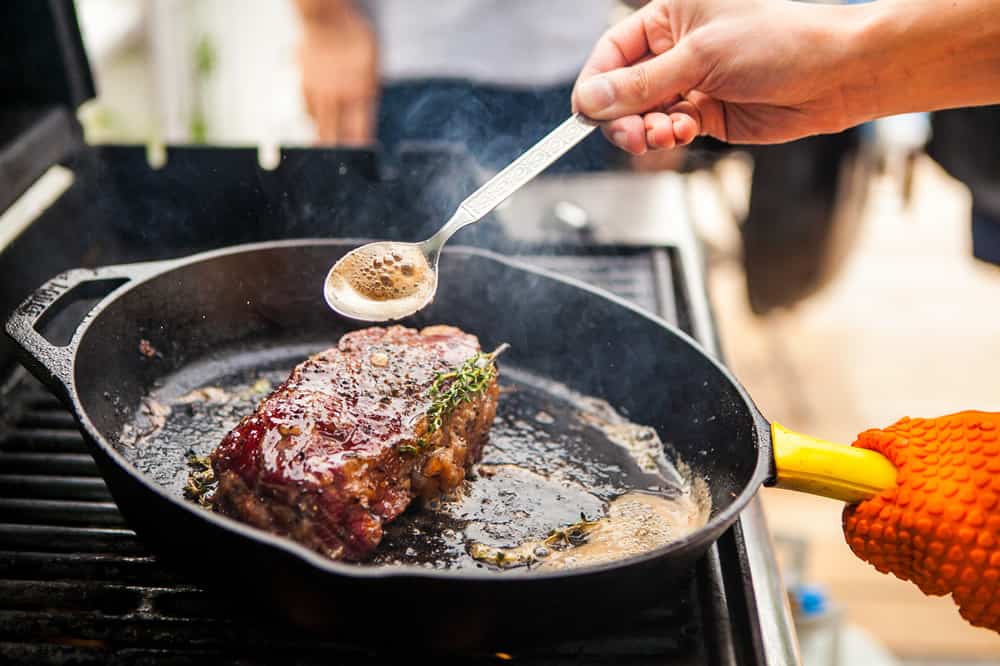 Cast iron has been a reliable cooking surface for hundreds, if not thousands of years. However, as it is with lots of things today, people are questioning the health benefits of using cast iron. Sure, many years ago people using cast iron lived long and healthy lives, but that does not necessarily mean cooking with cast iron is the healthiest option.

What is Cast Iron?

A cast iron pot or pan is created by pouring molten iron, mixed with a small amount of other steel usually carbon, into a mold. The reason it’s mixed with carbon is because iron is a soft metal and the carbon is used as a hardener. Still, the pan is mostly made up of around 97% iron.

Nonstick pans are usually coated in a chemical substance, to make it “nonstick.” However, at high temperatures, these chemicals can become toxic and break down and make their way into your food during cooking. This is the last thing you want! Perfluorooctanoic acid (PFOA) was one of these chemicals and it has now been declared by the World Health Organization as a potential carcinogenic. Thankfully production of this harmful chemical has been reduced, although not all over the world.

If you’re importing any nonstick cookware, be aware there may be some PFOA in its nonstick coating. Most companies have begun using polytetrafluoroethylene (PTFE) which is considered safe, but it still means that the nonstick coating has chemicals in it, which is not good at all.

The reason these chemicals have been mentioned is because cast iron does not contain any of them; their nonstick powers are completely natural. However, they do contain iron, obviously, and it can and does leach into your food. Considering that billions of people around the world are anemic, iron leaching into your food via the cookware can be contemplated as a good thing.

Alternatively, if you’re not anemic, potentially getting too much iron can be hazardous. An excess of iron has been connected to a variety of health conditions, including heart disease and Alzheimer’s. If you are a regular consumer of red meat, you should be aware of potentially over indulging in iron.

A few people who are safe from excessive iron intake are menstruating women, growing children and vegetarians/vegans. Those at risk are adult men and menopausal women.

Iron is one of the few minerals that can only be eliminated by blood loss, so an excess of it can be really dangerous. If you cook regularly with cast iron and suspect you may be suffering from an excess of iron, go and donate blood. Symptoms can include, but are not limited to, fatigue, muscle and joint weakness, inexplicable weight loss. Of course, your best option is to always consult your general practitioner.

Importance of Seasoning your Cast Iron

Cast iron cookware is easily susceptible to developing rust. To prevent this from happening, you have to regularly “season” your cookware by coating it with polyunsaturated fats. The more you coat, the better the seasoning layers are, keeping the natural nonstick finish that cast iron is so loved for. The pros of seasoning properly and regularly are plentiful. For example, you can eventually fry your eggs without them sticking and your pan won’t rust.

Should You Even Bother Buying Cast Iron Cookware?

So this just reinforces the importance of keeping your cast iron regularly seasoned.  If you search online, you will probably notice a lot of sites which are absolutely against using cast iron cookware. But as you can tell from the test mentioned above, it seems to be more fear-mongering than anything else. Yes, you will get some iron from your cast iron pot, but as long as you’re aware of your own health, there should be little risk.