How to Season a Rusty Cast Iron Skillet 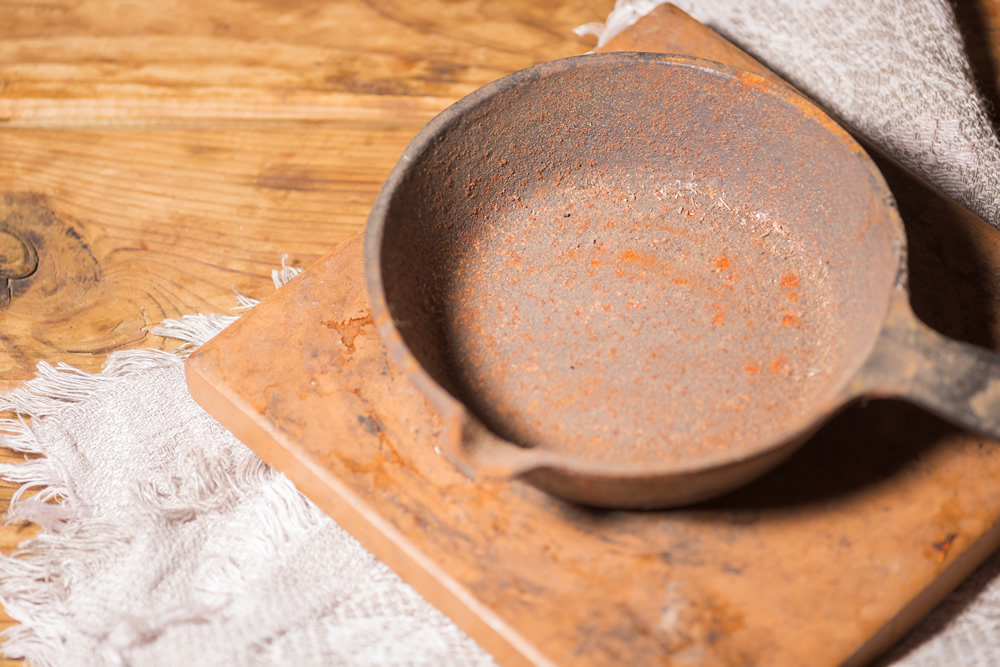 If your cast iron skillet has seen better days and is now covered in rust, don’t worry — we’ve put together a full guide on how to restore your trusty pan. Cast iron is extremely durable and can generally withstand a great deal of damage. Even the worst pans can be restored. It’s going to take a bit of work, but within no time you will have a cast iron skillet that looks like new and works great.

We’ll be showing you how to get rid of the rust, and how to season your pan so that nothing sticks. The patina also helps protect your pan from rust. After restoring your pan, all that it’ll take to keep it in perfect condition is a little maintenance and infrequent re-seasoning.

Light rusting is known as profile rusting. It is much easier to fix than deeply set rust. The sooner you notice profile rusting, the better the chances of getting rid of it without needing to scour the entire skillet.

Anything worse than light rust may pose more of a problem but it’s still not too hard to get rid of; all it takes is more course scouring and a little more work.

Use your fine steel wool to scour the skillet until its free from rust. Wet your cast iron skillet, add a little dishwashing soap, and then scour is small circles. Continue scouring until you reach raw cast iron.

You’ll notice the original black iron beneath the seasoning appear. When you do, stop and give your pan a good rinse. Scrub your skillet one last time but this time scrub it down with a dish sponge’s scrubber side  —  it’s far gentler than steel wool.

A great way to make removing rust much easier is to treat your cast iron with vinegar and water first. Make a 50/50 blend and fill your skillet. Allow it to stand for between one and six hours before scrubbing as per usual. This treatment is particularly handy for rust spots which are deeply inset. You’ll scour the pan to its raw cast iron much faster after this vinegar/water solution.

If your skillet is beyond manual restoration, consider getting it sandblasted. This is the best option for severe rust damage that spans the entire surface of the pan. Any machine shop will be able to sandblast the whole cast iron skillet which buffs the pan down to raw cast iron. All that you need to do then is season your skillet and its ready for use.

If you don’t want to go through this expense, then try scouring away the rust with a more abrasive solution. In extreme cases, try scouring away the rust using 100 to 120 grit sandpaper. This will leave you with a rough surface which you can then smooth down further using steel wool before seasoning your skillet. You won’t always get rid of all of the discoloration caused by the rust. Areas of your skillet may retain a slight red hue but don’t worry — this will dissipate as soon as you season your pan again.

If you want to make 100% certain that you get the best finish possible then head to a hardware store and look for a wire scrubber specifically designed for cast iron. It guarantees that you get all the rust away and any old patina so that you can season your pan and get a perfect cooking surface. A well-maintained skillet will not rust. Don’t store food in your pan. Stay away from acidic food types and excessively aromatic dishes as the taste can pull into your pan.

If this happens, you’ll need to scrub down the skillet to the raw cast iron and re-season all over again. Every skillet will need infrequent seasoning so keep an eye on your pan and look for signs of degradation. If your food is beginning to stick, you need to season it again.