How to Season a New Cast Iron Skillet 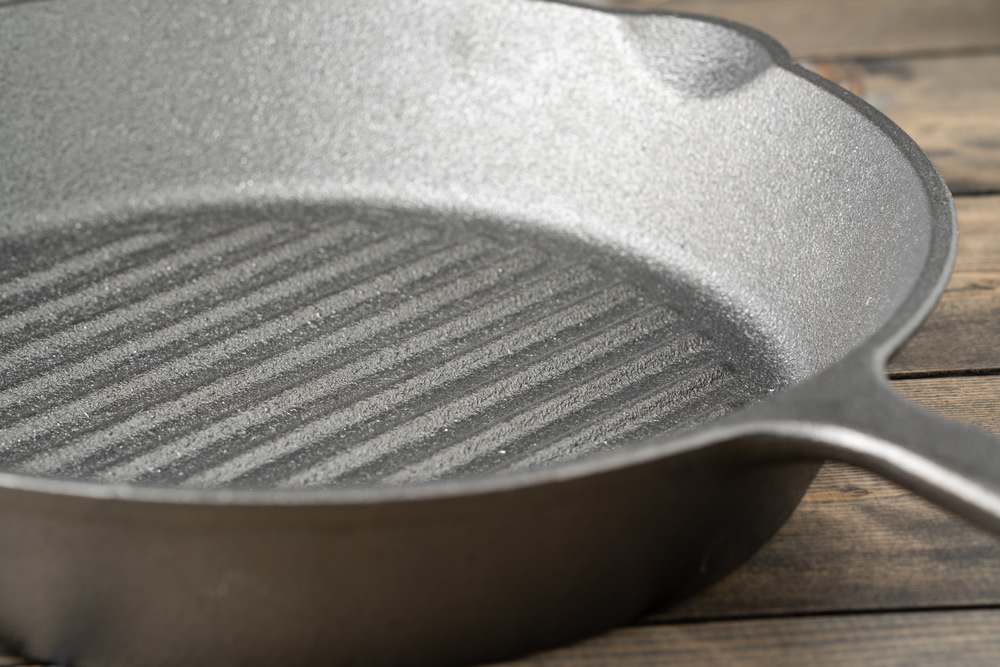 All cast iron skillets need to be seasoned to protect the metal while granting you a totally nonstick cooking surface. Seasoning a skillet develops a protective patina which grows stronger as you re-season your pan infrequently. Even though most new cast iron skillets come with a certain degree of pre-seasoning, it is always far better to season your pan before cooking with it.

As you season a skillet repeatedly, the protective layer becomes stronger and evener. Here’s a look at exactly how to season a new cast iron skillet so that you always get the best performance and protection for your pan.

Never wash your cast iron skillet with soap. Any detergent will degrade any pre-seasoning that your skillet may have, and most good cast iron generally comes pre-seasoned to a certain degree. Simply rinse your skillet with hot water before drying it off thoroughly. There must be no moisture present when oiling your pan.

Preheat your oven to around 350°F. This is the general temperature which accommodates most types of oil. As your oven preheats, put your skillet in so that it dries out completely but don’t let it get too hot as you still need to apply the seasoning.

Make sure that you’ve got a large tray positioned beneath the rack that you’ll be baking your skillet on. Alternatively, line a wire rack with tinfoil. As the cast iron bakes, any excess oil will drip down into either your tray or the lining that you set up.

Any type of oil or fat can be used to season a new cast iron skillet. Animal fats work but are not recommended as they turn rancid quite quickly.

Coconut oil is a popular choice due to being completely neutral in taste and smell. It also lasts for years. Flaxseed oil, avocado oil, canola and even sunflower oil can all potentially be used as well. Pick the oil that you prefer and apply a light coating using a paper towel or clean dishcloth. Rub the oil into your cast iron skillet covering the entire unit — inside, outside and handle.

Once thoroughly coated in a light even layer of oil, place your skillet upside down in the oven on a wire rack positioned above the drip tray. Bake your cast iron skill for between 45 minutes to an hour.

Please be advised, this process can generate quite a bit of smoke, especially when you choose an oil with a low smoke point (e.g. olive oil.) Make sure that your kitchen is ventilated and switch on your oven fan if it has one. When your skillet stops smoking or an hour passes, it’s time to turn the oven off.

Leave the oven door open and allow your skillet to cool down completely. This can take up to two hours or more, so be prepared to start early. Once the cast iron is cooled enough, use a paper towel or clean dishcloth to buff up a shine and wipe away any excess oil. You don’t want any oil residue left behind at all.

Look for a change in color which gives your skillet a glossy, dark patina instead of a dull grey look. This indicates that your seasoning has taken and another layer of protection has formed.

Repeat this entire process at least once to make sure that your new cast iron skillet has the best protection from rust that you can give it. You’ll also be pleasantly rewarded with a much better nonstick surface than you had before.

Now that you know how to season your brand new cast iron skillet, you also need to know how to take care of it.

Don’t store food in your cast iron cookware. Always clean your skillet immediately after each use. Use a little coarse/kosher salt to scrub away any food that may be stuck but never ever use detergent unless you’re trying to get rid of your seasoning. The only time you’d want to do this is when you’re getting rid of rust, or when you have applied too much oil and your skillet has ended up sticky.

Once its scrubbed clean, rinse with hot water and then allow it to dry with the help of your oven or stovetop. The fastest and easiest way to re-seasoning after each bout of cooking is to place your skillet on a  stovetop and then rub in a small amount of oil evenly, allowing the pan to heat for between 5 to 10 minutes. Let it cool, and then it’s ready to be stored in a warm, dry, well-ventilated area.