Do You Need to Season Enameled Cast Iron? 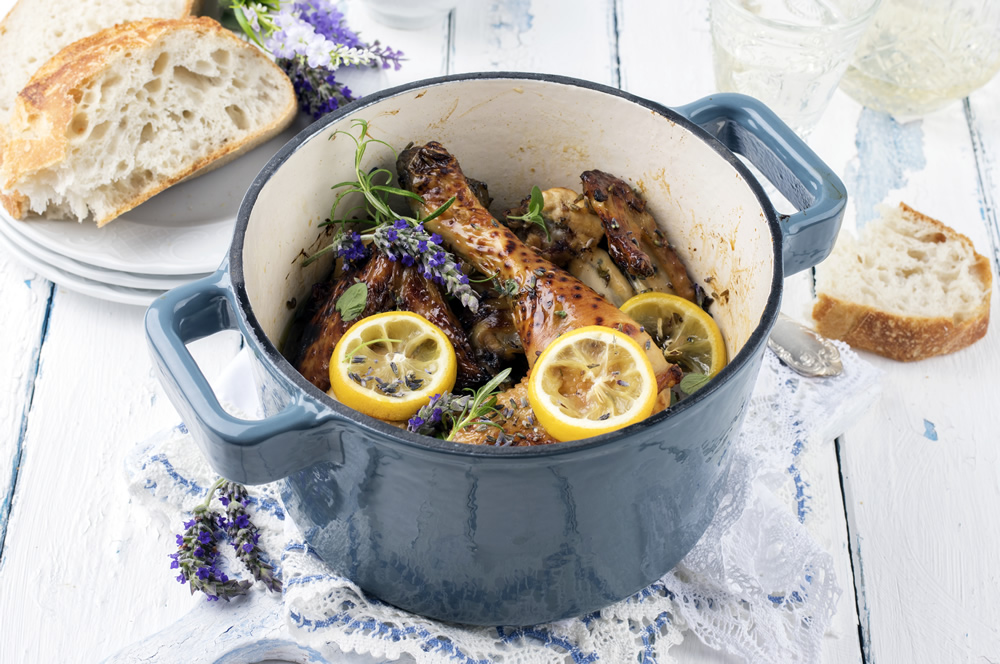 For the purposes of answering this frequently asked question, we need to delve into the differences between regular “naked” cast iron (the black range) and the colorful enameled range.

What is Cast Iron?

Iron was discovered many years ago, as an excellent surface for cooking food. Your cast iron pot is 97% iron and a small amount of carbon, melted and molded into the pans we know today. They are traditionally always black in color. Cast iron has always been regarded as the original nonstick pan. However, this can only come about if your cast iron cookware is properly and regularly maintained, in other words — seasoned.

Most modern cast iron cookware comes pre-seasoned, so you don’t have to concern yourself about it, until you start noticing the nonstick shine is losing its luster. Cast iron family heirlooms will more than likely require the occasional seasoning to boost the nonstick powers back to its incredible levels. You may also realize your pan requires seasoning if it reacts with your food, especially acidic foodstuffs. Things like tomatoes, vinegar, and lemon juice can strip your seasoning layers and will potentially leave a sort of metallic taste in your meal.

Using some salt as an abrasive and a sponge, clean your cast iron pot well, in hot soapy water. Do not leave your pot in water for an excessive period, ever! It will rust and although salvageable, it is completely unnecessary if it can be avoided. Once you’re happy your pot is clean, dry thoroughly with a clean cloth or paper towels. At this point, preheat your oven to a minimum of 375°F.

Once it has dried, using some melted shortening or vegetable oil, spread a thin layer over your pot. Now, the reason you have your oven on such a high temperature is to make sure the shortening or vegetable oil actually gets absorbed into the cast iron and forms a substantial seasoned layer. Place a tray or some foil on the lower rack of your oven, and your oiled pan upside down on the middle rack. The covered lower rack is to catch any drips from the pan. Bake for 1 hour and leave it in the oven to cool down.

Once cooled, store in a cool dry spot. It doesn’t have to be done once a week, only really when you start to notice any metallic flavors or the non-stickiness has begun to weaken. But if done enough, you will get plenty of years out of your cast iron cookware.

What is Enameled Cast Iron?

The enamel coating on enameled cast iron is also known as vitreous or porcelain enamel. It is produced by using extreme heat and powdered glass particles to fuse to the cast iron. The combination of different oxides, clay and minerals, along with powdered glass, enables a variety of enamel colors to be made.

Enameled Cast Iron: No. My enamel protects me.

Cast Iron: If I am properly seasoned, I should be okay. But it is possible.

Are you truly nonstick?

Cast Iron: If I am properly seasoned, I will be nonstick!

Will iron be added to the food I cook?

Enameled Cast Iron: No, not at all.

Cast Iron: Some will get into the food. There have been tests done on well-seasoned pots that found the iron leaching is minimal.

Can you cook acidic foods nicely?

Cast Iron: It’s not recommended as it does tend to strip the hard work of seasoning layering.

How much do you cost?

Enameled Cast Iron: I am at the higher end of the bracket, but then again, I am worth it! I am an investment.

Cast Iron: I can be found everywhere for very reasonable prices.

How long will you last?

Enameled Cast Iron:  If I am well looked after, I can last a long time. It has been known that the enamel can chip, but if you purchase from a reputable dealer with decent warranties and after-sales service, I can last a lifetime.

Cast Iron: I am over a hundred years old and have been passed down from generations.