Can You Use Olive Oil to Season a Cast Iron Skillet? 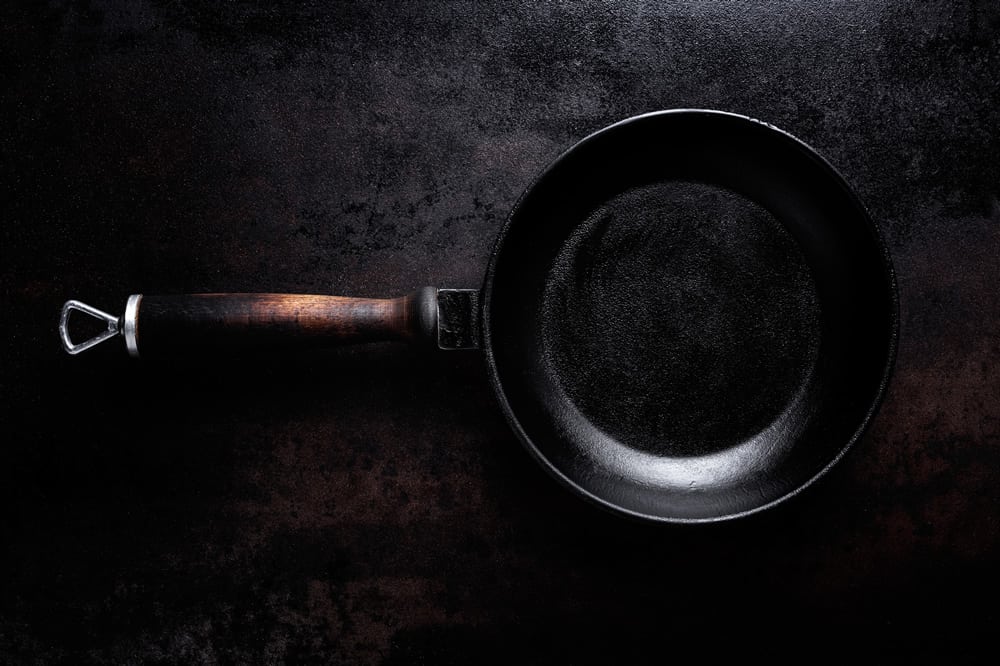 How to Season a Cast Iron Skillet Using Olive Oil

Seasoning creates a hard protective layer that protects your cast iron while distributing heat evenly. As the oil/fat heats it bonds with the cast iron through a process known as polymerization. Essentially, the oil is converted into a type of plastic which forms over multiple layers. Once the seasoning is correctly applied, the metal is fully protected, and your cast iron skillet is totally non-stick.

How Often to Season a Cast Iron Skillet

A brand new cast iron skillet needs two passes in the oven (as stated above) to guarantee that it has a good patina. Used cast iron needs to be seasoned once every few months or whenever you notice that the patina is fading.

To re-season a cast iron skillet, simply scrub your cast iron skillet with warm soapy water before allowing it to dry completely. Once dry, season your pan using the instructions above. Re-seasoning normally needs a single pass in the oven rather than being oiled and baked twice.

Olive oil may work for seasoning a pan, but this doesn’t mean that it’s necessarily the best option. In actual fact, all oils and fats work as seasoning agents, but what you’re ideally looking for is an agent with a high smoking temperature. Olive oil will most likely fill your oven with smoke thanks to its low smoke point, but this doesn’t mean that the patina is inferior in any way.

Unsaturated oils like canola, vegetable, soybean and corn have a far higher smoke point which makes seasoning a little easier with far less smoke. Ultimately, it’s up to you. No matter which oil you use, with the right attention and enough care a good patina will develop.

No matter how tempting it may be, don’t cook anything acidic in your skillet. If you do end up discoloring your pan thanks to acidity, then scrub your pan down with baking soda and then re-season it before use. Delicate fish is another meal that you should avoid in a cast iron skillet. Certain fillets are so delicate that they’ll stick no matter what.

Finally, never store food in a cast iron skillet. The seasoning will be ruined, and the flavors of the food will leech into the iron, which will leave an unpleasant taste to everything else that you cook. Always clean your cast iron skillet directly after use.

The key to a perfectly seasoned cast iron skillet is to rub the oil in all over, buffing the pan so that every last glimpse of greasiness is gone. If there is even a tiny amount of excess oil left, you will find that your surface turns sticky after a few days. Always check your pan after oiling and baking it. If there is anything more than a glossy sheen, take a cloth and buff the pan thoroughly before allowing it to bake for another 30 to 45 minutes in the oven.

Prepare Your Oven for Seasoning

Make sure that you place a tray beneath the cast iron that you’re baking in your oven so that any excess oil can be caught. Alternatively, line a wire tray with foil to serve as a means to catch the dripping oil. Also, you should keep in mind that certain types of oil generate massive amounts of smoke so be prepared to ventilate your kitchen, keeping your windows open and oven fan on.

If you notice the black glossy patina fading, then it is time to season your cast iron skillet again. You’ll need to season it quite frequently in the start, but once the patina has grown in strength, you’ll have a cooking surface that requires nothing more than light cleaning to retain an amazing degree of non-stick cooking and high-temperature distribution. A properly seasoned skillet can last a lifetime.