Can You Season Cast Iron with Coconut Oil? 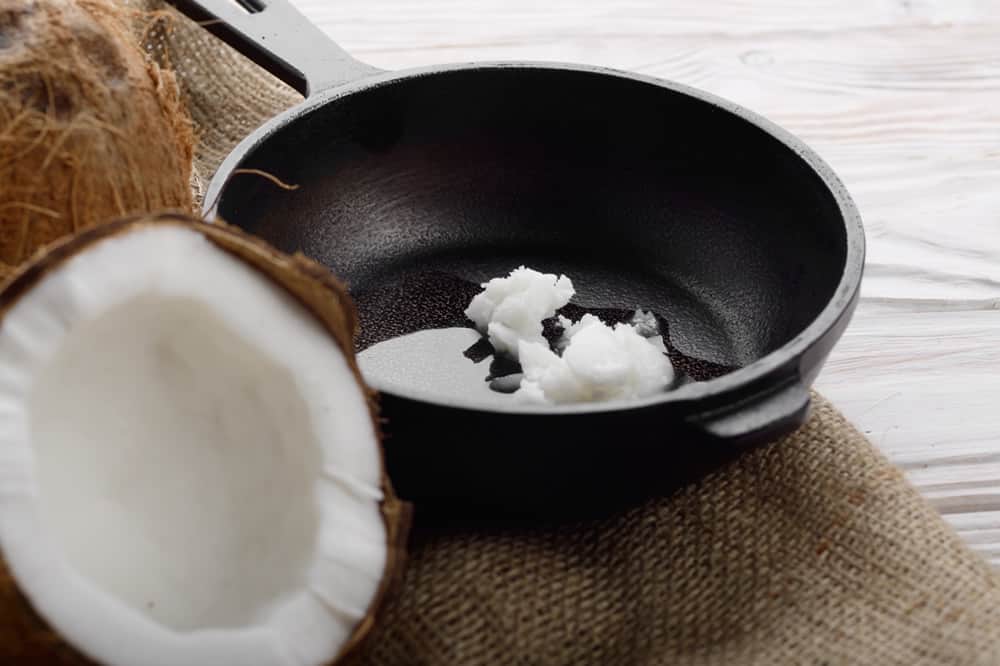 Use a Lower Heat

Seasoning with coconut oil and seasoning with other oils or fats involves the exact same process. The only factor to keep in mind is that coconut oil has a much lower smoking point, which means that you shouldn’t heat your oven to as high of a temperature. Instead of 450°F, you’ll be baking your coconut oil seasoned cast iron at 300°F. As soon as your cast iron stops smoking, it is finished baking, and you can then start wiping away any excess oil.

Don’t Use Too Much Oil

The key to good seasoning is using just the right amount of oil. If you use too much your cast iron will be left sticky, and you’ll have to wash away some of the protective layer with warm soapy water. It is far better to season your cast iron pan using a small amount of coconut oil applied evenly, and then re-season it and bake it again and again even if needed, rather than using an excessive amount of oil.

There is no need to wait in between bouts of seasoning. When you first get your cast iron cookware, take the time to season it thoroughly, repeating the process three or four times for the best results. This will guarantee that your cooking surface is completely protected from rust and you are rewarded with the pleasure of cooking on a pan, pot, or skillet which is extremely non-stick. Some people combine different natural oils to fortify the seasoning.

While highly experimental, certain cooks have praised combinations like three layers of coconut oil followed by three layers of flaxseed oil. Feel free to experiment as you wish as combining oils cannot detract from the quality of the patina.

If it Doesn’t Take, Try Again

Coconut oil has a lower smoke point than other vegetable oils but it’s still higher than olive oil. Nonetheless, you could encounter a slight issue whereby your coating just doesn’t seem to take. If you don’t notice the color changing or the oil begins flaking then turn the temperature of your oven down before wiping the cookware clean, re-oiling lightly and then baking again.

While this is a potential hiccup, most people never run into the problem and if you do it’s easy to overcome with just a little adjustment.

Coconut oil is one of the best forms of seasoning for storage. There is no chance of it turning rancid, and there is no fat transferred to your cast iron cookware. You can season and store a cast iron pot, pan or skillet for years without the patina degrading as long as you get the storage conditions right. Good-quality coconut oil lasts for up to two years, which means that your cookware can potentially be stored for equally as long.

Don’t forget to lightly season your pan after cleaning following each use. Every time that you do this, you make your cookware more non-stick, and you improve its protection against the elements stopping rust.

The more saturated the oil, the less likely it’ll oxidize meaning the less likely your patina will degrade. Coconut oil is highly saturated and, as mentioned, contains no fat. It’s one of the cleanest, safest oils to use for a wide range of purposes and is an excellent cast iron seasoning agent. Inexpensive, highly effective and guaranteed to match any dietary habits, coconut oil should definitely be considered for your cast iron.